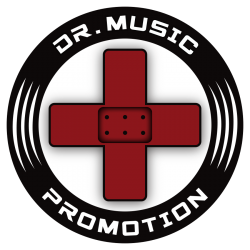 True to the motto ‘Medicine for your ears | The all-round carefree service for bands, artists and labels’ we offer a wide spectrum of services in the music industry and we are established for a long-time experience in the entertainment business and the creative accomplishment of worldwide cross-media PR campaigns since 2006. We cover the whole range of print, online, radio, playlist, TV and tour promotion.

Our full-service agency Dr. Music Promotion is treating patients in the fields of music promotion and marketing service, in our case, labels, bands and solo artists, who want to gain hold in the media scene with their records (CD/DVD/vinyl/download/streaming). Whether it is for the rise of popularity, increasing the sale of their sound carriers or receive press commentaries for festival and concert submissions or rather to promote their tour. Before every campaign, we take an intense health check and test the music and the available information about our patients through listening and tapping. Subsequently, we prepare the editorial information and announcements for the press and place them on the relevant media platforms to get the best chances for a cure. At the submission, we attach great importance to a specific selection of contacts that match the particular subject but without practicing mass mailing with thousands of contacts with a high spreading loss.

Furthermore, we take over the organization of competitions and raffles as well as the placement of advertisement campaigns for online communities like Facebook or Google on existing advertising budgets. Dr. Music Promotion, according to the amount of advertisement budget, can also gladly do the traditional advertisement marketing in the print and online field.

With the artist & label services of Dr. Music Records, we gladly help bands and artists as well as record companies that do not yet have a distributor, which puts their musical infusion physically on CD and vinyl as well as digitally on the market.

In our database, thousands of international music and lifestyle journalists are waiting for fresh acoustic infusions from our musicians and their albums. Dr. Music Promotion takes care that the music is put through its paces and gets rated by the media partners. For every release an individually adjusted mailing list, containing youth and scene magazines (Metal, Rock, Alternative, Punk, Gothic, Pop, Electro, Singer-Songwriter, Folk, Country, Blues …), music portals, yellow press or daily news is sampled without divergence loss. In case of a positive result, a directly, adjusted interview or feature is prescribed.

Besides the classical promotion therapies like the physical sampling, including active following up of interviews, reviews, soundchecks, features, music video premieres or raffles along with a regular report, we also use modern, digital tools for the secure, watermarked forwarding of music files.

Our radio surgeries cause regular rotations, airplay, interviews or album presentations. Here, we reach the so-called ‘Leftfield’ with the college radio stations, numerous free radio stations as well as the commercial and public service radio stations, like 1Live, HR3, DASDING, BBC, P3, NRJ. Of course, we also take care of the presence on relevant online radios.

For every diagnosis there is a tailor-made mailing list, that is constantly updated, to generate a maximum amount of attention for the single or rather the artist. At the radio promotion we work with a combination of physical sampling, the obligated sampling via the music promotion network (MPN) and digital sampling. Internationally, we use tools such as PlayMPE for the best possible coverage.

Digital streaming platforms have become a major player in the music business. There is no way around Spotify, Apple Music, Deezer etc. and their official playlists to achieve the breakthrough. But the way for emerging patients is not easy and here the specialists of Dr. Music Promotion help to convince the curators and the algorithm.

At the playlist pitching we present the singles of our musicians to relevant independent playlist curators in order to attract more attention in the form of streams. Besides the official playlists of the streaming providers, there are now numerous great free playlists with thousands, sometimes even millions of followers who are just waiting to discover new music and present it to their listeners. For this, we search for suitable contacts for the respective topic and genre from our continually growing database of international playlists and thus ensure streams from the right target group.

Thanks to the digital motion picture technology, professional music videos and lyric videos have also become affordable for newcomers. To let these video clips not only appear at YouTube and other online portals, the team of Dr. Music Promotion takes care of the submission at relevant music TV channels such as MTV, Deluxe Music or RCK.TV and their special interest shows as well as online presences. Besides the clips, we gladly take care of a direct transfer to appropriate show formats for live performances or TV interviews.

Furthermore, we send newsletters to all relevant media as well as digital key accounts and try to place the music video on suitable YouTube playlists. Broadcast ready music video files in the formats MOV or MP4 must be delivered in high-res quality and at least in Full HD resolution.

We promote our patients’ tours through all relevant media and make sure that the concert dates are announced in the regional press on time. Dr. Music Promotion arranges presentations and ensures that journalists report on the shows to document a sustainable success.

Furthermore, it often makes sense to combine this with the medication from our radio packages in order to arrange interview dates besides radio airplay at the health resorts.

We are able to take over the label management in the German-speaking area for domestic and foreign labels and organize their releases as national representatives. Here we coordinate the PR and the operative marketing as well as on request the procurement of the appropriate distribution partner so that the musical infusions also find the optimal way into the record stores and online shops.